The CMP is a powerful stereo effects processor which expands significantly on the original Clouds by Mutable Instruments. Dedicated controls for previously hidden functions, additional CV inputs, four memory banks for saving samples, and a digital CV attenuation schema make this one of the most unique audio processing modules in the 4U 1.2v/oct ecosystem. Eight DSP modes are available which cover granular synthesis, pitch shifting, glitch-inspired audio looping, and spectral processing along with unique digital reverb and delay effects.

The CMP is a compact version of the Stereo Microsound Processor with the same basic functionality. An upgraded digital brain allows the CMP to support the "Superparasites" firmware which includes eight DSP algorithms. This firmware combines DSP code from the original Clouds by Mutable Instruments, Clouds Parasites by Matthias Puech, and two additional modes by Julius Kammerl. To change the DSP mode, press the TIME switch (upper left) for a few seconds and then press the switch to cycle through the list of algorithms below. The TIME LED will blink slowly to indicate the current algorithm, as shown below. The selection mode will automatically exit after a few seconds. 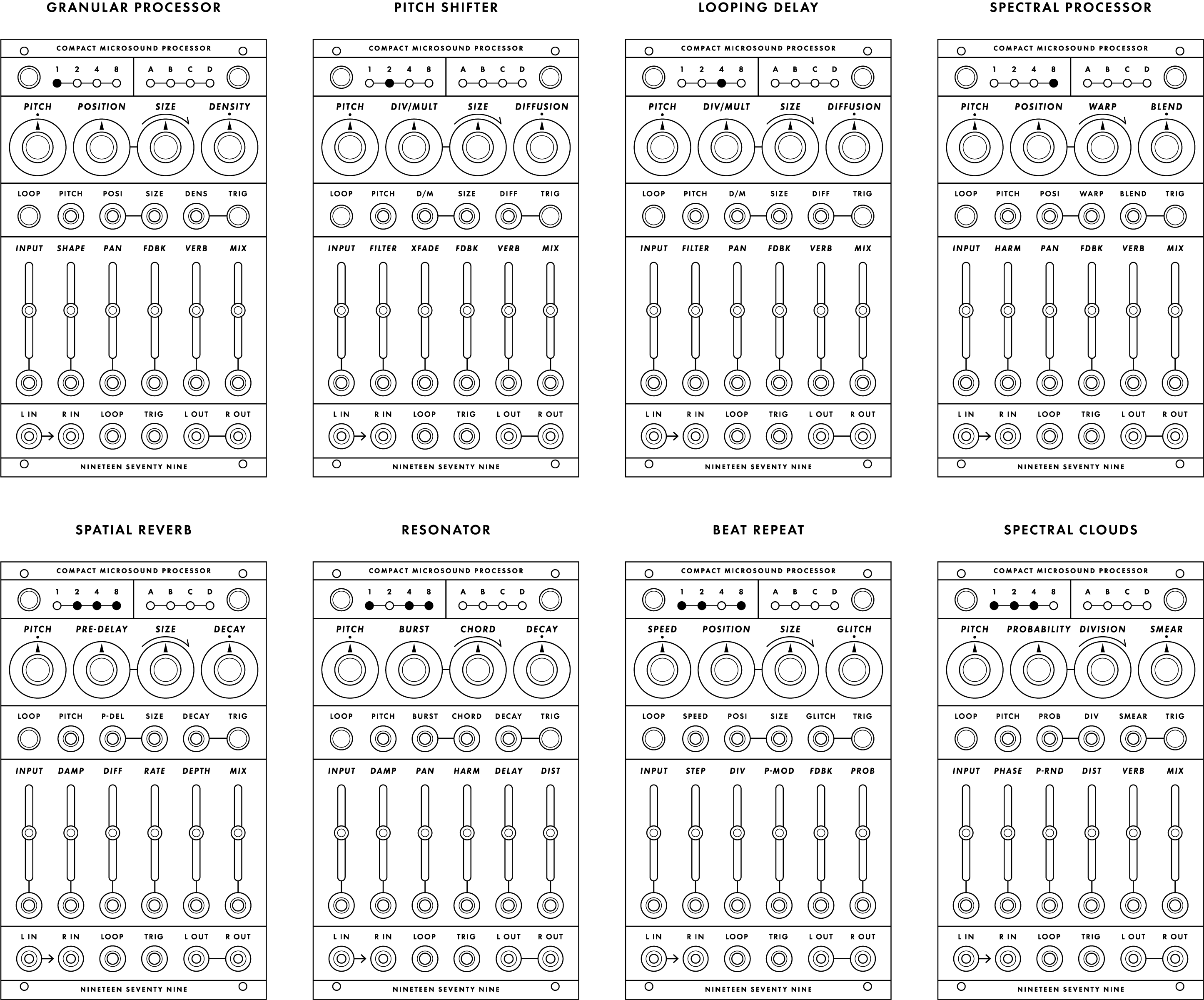 Time/Quality settings. Tap the TIME switch (upper left) to modify the recording time. There is an inherent relationship between recording time, sample and bit rates, and whether audio signals are processed as mono (left channel only) or stereo. After changing this setting, the TIME LED will blink until the buffer has been filled.

Audio capture and looping. Most of the DSP algorithms provide a way to capture and loop an audio signal. When the LOOP LED is off, live recording is active. Press the LOOP switch to capture the current audio buffer. Live recording will stop and the captured audio buffer will be looped indefinitely. The looping feature can also be activated remotely by applying a positive voltage to the LOOP jack. Looping will remain active for as long as the positive voltage is applied.

Saving/loading audio loops. When the LOOP LED is on, you can save the captured audio buffer and reload it later. There are four memory banks labeled A-D. Press the BANK switch (upper right) for a few seconds. The LEDs will indicate the current memory bank. Tap the switch if you want to change which bank the audio will be saved into (by default it will be saved into the current bank). Once you've chosen a bank, press the BANK switch for a few seconds to save the audio permanently into the module's memory. To exit without saving, simply wait a few seconds and the selection mode will automatically exit after a few seconds. After saving or exiting, saved audio buffers can be loaded by tapping the BANK switch to cycle through the four memory banks (A-D). If the LOOP switch is turned off after loading, the audio buffer will be cleared and live recording will begin. However you can recall the current memory bank by pressing TRIG and then BANK. This will reload the saved buffer and reactivate the LOOP switch.

External synchronization Most of the DSP algorithms also provide a time-based element. Patch an external pulse from a sequencer or function generator to the TRIG input. The Beat Repeat mode is unique in that it requires an external clock to set the tempo, this can be provided through the TRIG switch or the TRIG jack.

Virtual attenuators. The physical attenuators from the SMP were removed but external CVs can still be attenuated. Unipolar attenuation is applied by pressing the TIME switch (upper left) and moving the associated knob/slider. Bipolar attenutation/inversion is applied by pressing the BANK switch (upper right) and doing the same. For bipolar attenuation, the lower half of the knob/slider range inverts the signal and the upper half of the range attenuates without inversion. To disable attenuation, press either switch and turn the knob/slider to its maximum level, this will allow 1:1 modulation of the target parameter.

Output gain. The output gain knob from the SMP was also removed but the gain can still be adjusted. Press the TRIG switch and adjust the MIX slider. With the slider minimized, the output will be silenced. With the slider maximized, approximately +6 dB of makeup gain will be applied. For unity gain, adjust the slider to approximately 2/3 of the maximum. Note that amplifying the signal beyond unity gain may increase the audio noise floor. To avoid this, increase the input gain so that less makeup gain is required at the outputs.